I took these shots of Jupiter with my 7″ Maksutov Cassegrain.

Seeing what good but not at the best this night. Seeing was below average first (first shot) and then turned better progressively at the same time Jupiter raised in the Sky.

However the LRGB technique I have been using lately allows to have quite good  resolution planetary imaging with average seeing, by extracting the best frames out of the large frame number / high speed luminance AVI.

For the first time I used the  Astra Image photoshop plug in for deconvolution (maximum entropy deconvolution) and wavelet sharpening.  I got this time better results compared to the deconvolution software “Focus Magic” I have been using so far.

I would recommend this software for planetary image processing. 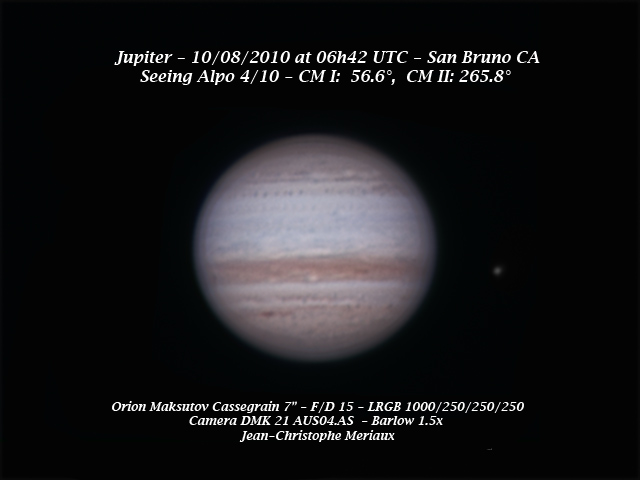 This entry was posted on October 17, 2010, 9:20 pm and is filed under Astrophotography, Planets. You can follow any responses to this entry through RSS 2.0. You can leave a response, or trackback from your own site.